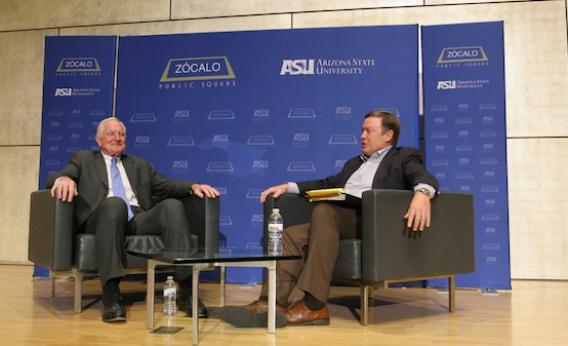 When Michael M. Crow, the president of Arizona State University, introduced Craig R. Barrett, the former CEO and president of Intel, he called Barrett “a singularly important actor in one of the most profound technologies in human history.”

But when Barrett entered Stanford University in 1957 as a student of metallurgical engineering (not even knowing how to spell the word metallurgical), the changes of the next half-century with which he would be intimately involved were impossible to imagine. The world was only on the cusp of technologies like the modern transistor and integrated circuits that made our current digital age possible; advanced computing hadn’t yet been realized.

In a wide-ranging conversation with Crow, in front of a full house—with additional audience members watching in a nearby overflow room—at the Phoenix Art Museum, Barrett discussed the past 50 years of technological change and offered some broad thoughts on his hopes for the future.